Last year, Waka Kotahi NZ Transport Agency released initial plans for changes to the highway through Rolleston, which included the Rolleston Flyover. Following feedback on that plan, NZTA has released the new proposed flyover and intersection plans that link the township to the industrial iZone.

I am really concerned about the short-sightedness of this proposal. It seems to me to be a band-aid measure that will not future-proof the transport network in New Zealand’s fasted growing region.

Firstly, the proposal includes a significantly smaller and steeper flyover onto Jones Road (as steep as the Otira Gorge in places) that will require anyone wanting to access the motorway from Rolleston Drive to go through a convoluted route and three sets of traffic lights. The gradient will be a nightmare for heavy trucks, which will create huge noise and road damage in an effort to constantly accelerate up and over it.

Secondly, despite initially stating that this upgrade project would be a long-lasting package of road and rail improvements, it is unclear how this new proposal will improve traffic and connectivity between the residential and industrial zones in the long run.

Thirdly, businesses within the iZone have invested in the area based on the original angled flyover proposal, which has been in the district’s Long Term Plan since 2015. They were not aware of this plan as it does not appear in any LIM reports. 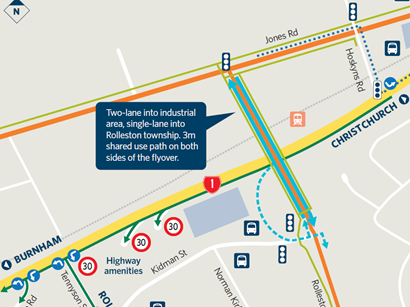 With Rolleston growing as fast as it is, all infrastructure projects must be not only fit-for-purpose but also future-proofed. The new proposal simply seems to be a short-term cost-cutting exercise to the detriment of the town’s future.

I would hate to see such a short-sighted measure being implemented just so that the Transport Minister, Michael Wood, can have a photo opportunity in Canterbury before next year’s election and try to tell us all that he’s doing something for our region’s roads – especially because we all know that’s simply not true.

Submissions are now open on the new proposal, and I highly encourage everyone to have a say. Simply email [email protected] with your thoughts or click below to make a submission